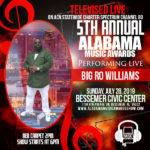 Roosevelt “Big Ro Williams” is a soul artist from Birmingham Alabama. Like most artist he found his love for music as a young child in church. He loved to sing but he had a heart beat for percussion. He started playing drums in elementary school and pursued his passion through college. Playing behind southern soul artist like Sir Charles Jones and Poo Nanny he desired to get back out in front of the band. He recorded his first EP entitled

Three songs off the EP hit #1 on the American Blues Network chart and gave him a warm introduction in soul music. He went on to wow audiences with his southern charm. Being a true entertainer, he was given the name The Big Daddy of Soul. In 2016, he released his CD “Shot House Music”. It’s a very soulful combination of songs that showed his versatility. The CD opened doors that took him worldwide. Being on the line up with many major artist Big Ro Williams knows how to hold his own. He makes the audience laugh, screams, shout and dance all night. He performs with his band and he does track shows. He is recently working on his third

Williams is a soul artist that is really making his mark in soul music.