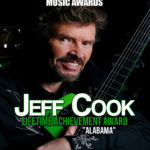 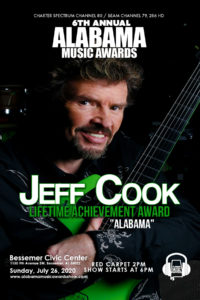 Born in Ft. Payne, Alabama, Jeff has been playing lead guitar and keyboard since the age of thirteen. Securing a broadcast license three days after his fourteenth birthday, Jeff went to work as Host and DJ of The Jeff Cook Experience at a local radio station.

The “broadcast bug” got into Jeff’s blood and later resulted in owning a radio station and TV stations. In addition to his rich vocals, Jeff Cook, “Mr. Musician” who served as Vocals, Lead Guitar, and Fiddle player for the group Alabama, has just about done it all.

Alabama signed a recording contract with RCA Records on April 21, 1980, launching a career that to date has resulted in 21 gold, platinum and multi-platinum albums, 43 number one singles, and more than 78 million records sold. Alabama has received over 150 industry awards including 8 Country Music Association honors for “Entertainer of the Year” and 2 Grammy Awards, 2 People’s Choice Awards and their very own star on the Hollywood Walk of Fame. They were named Artist of the Decade by the Academy of Country Music in 1989 and Country Group of the Century by the RIAA (Recording Industry Association of America) in 1999. In November of 2005, Jeff and his bandmates received Country Music’s highest honor, being inducted into The Country Music Hall of Fame.

Alabama is one of the 20 best-selling acts of all time. In the U.S. alone, they have sold more albums than Elvis and The Beatles combined. In 2001, Jeff received the Orville H. Gibson Award as Guitarist of the Year by the Gibson Guitar Company and he was recently inducted into the Fiddlers Hall of Fame.

Also, along with the group, they were awarded the Lifetime Achievement Award at their Induction into the Musicians Hall of Fame. After Alabama’s 2003 Farewell Tour, Jeff and his rejuvenated enthusiasm for performing hit the stage again with the All-star Goodtime Band singing some of the 25 years of hits plus his own special blend of “Country, Soul, & Rock n Roll”. Jeff plays an electrifying lead guitar, and all those “hot licks” on the fiddle you hear are Jeff. Between the guitar and fiddle, You would think Jeff stays pretty busy. Well, “Mr. Energy” also plays keyboards, bass, mandolin and drums.

Jeff and wife Lisa, enjoy spending their spare time between their homes in Florida and Alabama, usually with at least one Sheltie in tow. Alabama, withstanding the test of time, has recently celebrated their 50th anniversary and continue to perform to sold-out crowds all across the nation.